Marvin J. Hughes, a criminal justice graduate student in the Legal Studies Department, was named 2016 Officer of the Year by the Holly Springs Police Department in Holly Springs, Mississippi.

Following a passion in public service, Hughes started his job with the Holly Springs P.D. in October of 2015 after a referral by Dr. David McElreath, associate professor of legal studies at the University of Mississippi.

“Dr. McElreath believed the Holly Springs department would be a great fit for me,” said Hughes. 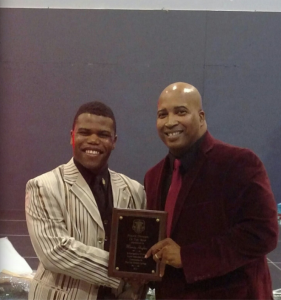 Swearing to serve and protect the public, Hughes enjoys working in the Holly Springs community, where he considers himself a part of a bigger family within the department. Hughes received the Officer of the Year award during the annual City of Holly Springs Christmas party on December 9th, 2016.

“I’m thankful for the support from the Holly Springs Police Department’s administration and Chief Dwight Harris,” said Hughes. “The department has supported me as I obtain both academic education and professional experience.”

Dr. Eric Lambert, legal studies chair and professor, says the award is a major accomplishment for Hughes and the department.

“Mr. Hughes is driven to help others, whiling making the community a better place for everyone,” Lambert said. “I commend him for his dedication to helping others and am happy he is a member of this department.”

Marvin Hughes graduated with bachelor of arts in criminal justice in Spring 2016. As an undergraduate, Hughes participated in several organizations such as Naval Reserve Officer Training Corps, National Society of Collegiate Scholars, and Alpha Phi Sigma Criminal Justice Honors Society. He even earned a School of Applied Sciences Student of the Month Award in 2015. 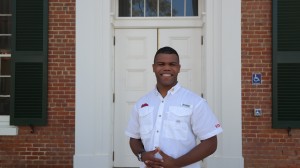 Inspired by James Meredith, UM Alumni and activist, Hughes said he lives by the simple phrase: Excellence through perseverance and opportunity.

“I am thankful to have been considered and given such an honorable distinction. I only hope to continue providing excellent and quality service to the community I serve.”